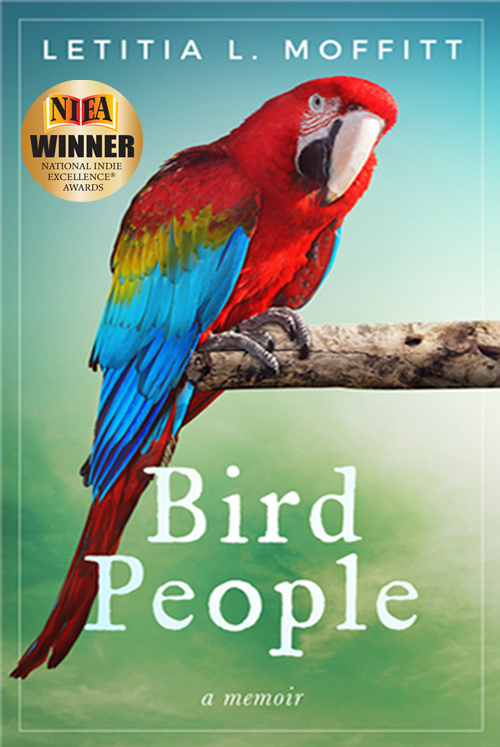 “… a blueprint for anyone wishing to provide the best possible life for a captive large bird.”

AFTER MOVING FROM New York City to rural Illinois, writer Letitia Moffitt met veterinarian Ken Welle. As she began to share more of her life with him, Letitia realized this would also mean sharing her time with animals. Yet she never suspected how tense, terrifying, and noisy those moments would be. Ken loved birds—big, beautiful macaws in particular—and he did not merely want to own them. He wanted them to fly free.

Bird People tells the story of Ken’s struggle to make his dream come true, and how Letitia found her own way to share that dream. It’s a tale of love, delight, sorrow, adventure, and truly massive amounts of work, as Ken and Letitia trained the birds – a blue-and-gold named Boston, and a green-wing named Phoenix – and transformed their living space to be not just bird-friendly, but bird-centric. It’s the tale of two adult humans, the dog who helped them find each other, and the birds who became the focus of all their lives. It’s a story about living your dreams, even when they don’t turn out how you expect.

Above all, Letitia Moffitt’s touching, inspiring, often-hilarious memoir is a reminder that hard times are as valuable as good times, and that all the moments matter.

“Her stories really build and build and draw you further into the worlds she creates.”

“Moffitt’s writing is utterly engaging right from the first page.”